The Thames River is central to the city of London’s history, identity and landscape. Looking to revitalize and enhance the Thames while knitting it into a comprehensive vision for this Ontario city, the London Community Foundation in partnership with the City of London and Upper Thames River Conservation Authority launched an international ideas competition that focused on improving a five-kilometre-long stretch of the 40-kilometre corridor in the city centre, including detailed development strategies for two key nodes—the Forks and the SoHo neighbourhood—to support urban regeneration and economic development. Five teams were shortlisted; superkül was delighted to be part of the G-Radiant City team led by Janet Rosenberg & Studio.

Key to the G-Radiant scheme was bringing the river deep into the city along new branches of blue and green infrastructure, creating both an aesthetic and deeply functional new relationship between land and water. In doing so, the scheme generates a more resilient and serviceable river rather than returning it to a historical state that disregards current conditions and uses. Inspired by the river’s expansion and contraction in response to changes in weather and season, its channel is expressed as zones of transition between wet and dry, river and city. The scheme cleanses the water, supports natural habitat, and creates a beautiful space with opportunities for outdoor activities throughout the seasons.

At the Forks site, the existing Kensington traffic bridge is converted into an urban beach through the introduction of sand, winged canopies and a widened platform, offering unique views from atop the river. The SoHo neighbourhood is reimagined as a vibrant retail and cultural hub. A new linear plaza is flanked by the newly restored historic Colborne hospital building, in which artists’ galleries and studios are introduced. At the end of the plaza, a large canopy functions as a site for civic gatherings with views of the river, which transitions to a gently sloped bridge across the Thames, connecting to the parks beyond. 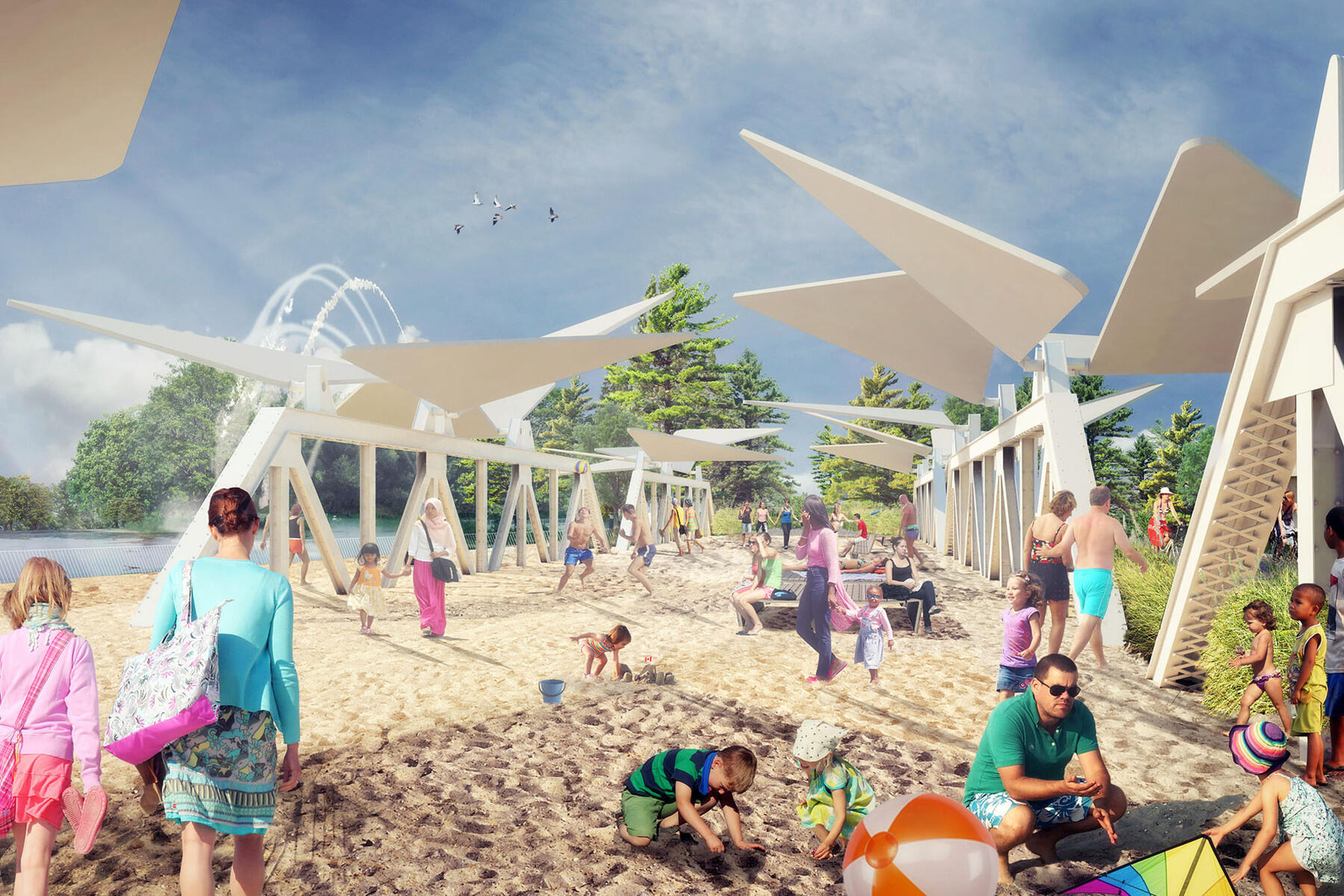 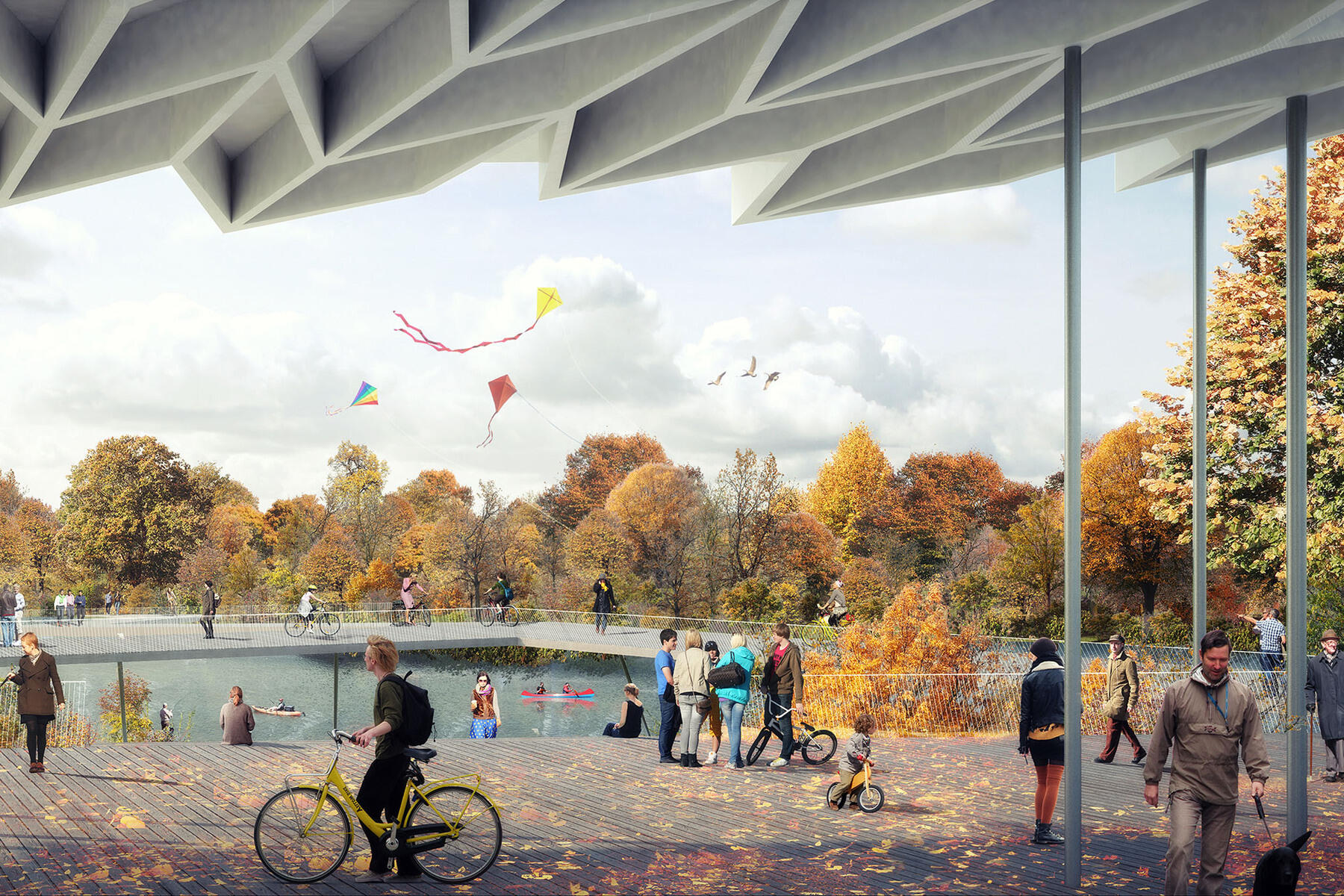 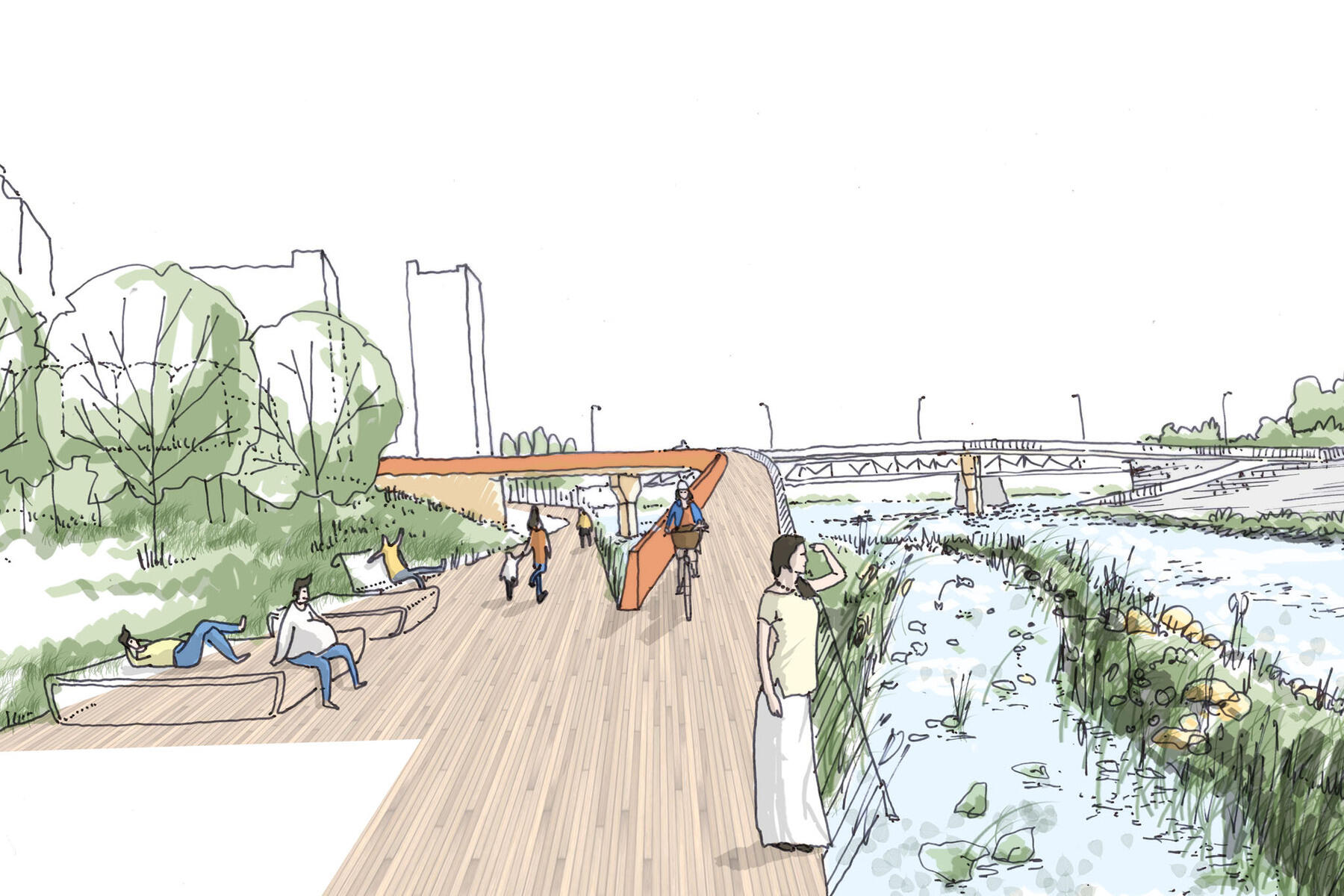 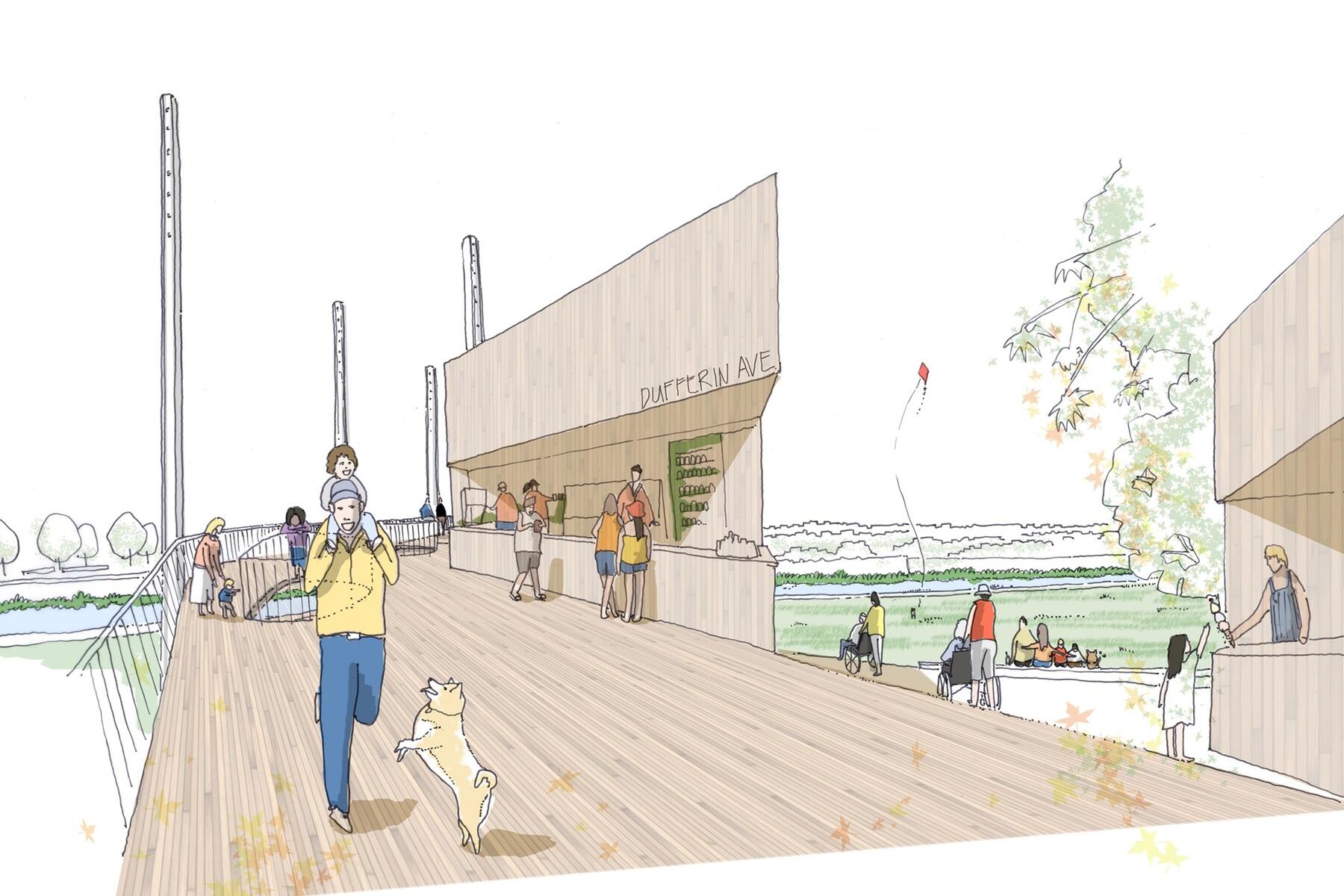 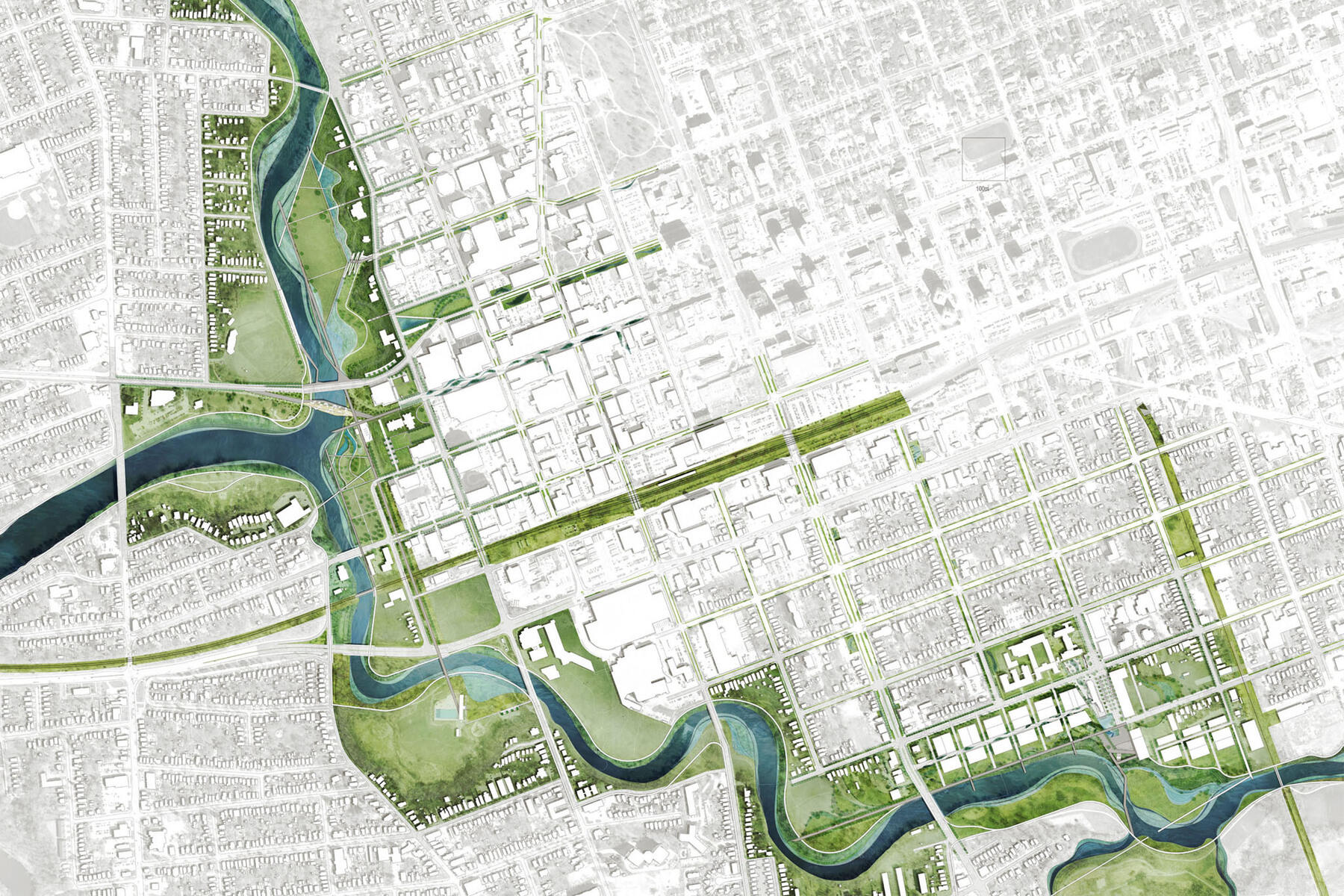